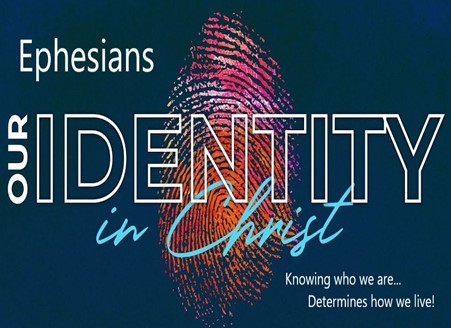 Series Title: Our Identity in Christ

Introduction: PP: Legos, we’ve played with them for years. This is usually how we see them… piled up or spread across the floor.

We’re so familiar with them that we can miss the brilliance of this child’s toy. Here’s what’s so cool about them:

Followers of Jesus, our text this morning will show us that we were not made to live a solitary life as a Christian, but instead we were made by God to be connected to each other, to fit together as one.

Transition: Open your Bibles to Ephesians 2:11. Paul will begin our text by reminding us what we were at one time…

PP: Therefore remember that at one time you Gentiles in the flesh, called “the uncircumcision” by what is called the circumcision, which is made in the flesh by hands, remember that you were at that time separated from Christ, alienated from the commonwealth of Israel and strangers to the covenants of promise, having no hope and without God in the world.

Gee Paul, don’t pull any punches when you describe what we once were apart from Christ. Let’s break it down:

First, PP: Paul is addressing Gentile Christians, not Jewish Christians. Again, Gentiles are a generic term for anyone who is not Jewish.

Second, PP: the Jewish people had a derogatory nickname for Gentiles… the uncircumcision.

What the Jewish people were actually saying was that all Gentiles were not part of God’s covenant with Israel. Paul clarifies that in this passage as being strangers to the covenant of promise.

they were not saved by God’s grace, they were dead in their sin and destined to experience God’s judgment and wrath.

PP: Look, all of this put together reveals that all Gentiles have no purpose, no future to look forward to, while the Jewish people had the promise of the Messiah, the one who would make them right with God.

It’s seems all of chapter 2 has been dedicated to reminding the Gentile Christians just how bad their life was before being placed in Christ, by God’s amazing grace. Why?

What a sad, sad state to live in…

PP: But now in Christ Jesus you who once were far off have been brought near by the blood of Christ.

All because they were made in Christ, by God, as a result of Jesus shedding His blood on the cross, by which those who were far off, near to God.

Near doesn’t mean almost. It means near to His presence as in Hebrews 4:16

Through Jesus, God, made us fit together with Him. That’s what verses 14-22 are all about. Let’s look.

PP: For He Himself is our peace, Who has made us both one and has broken down in His flesh the dividing wall of hostility

ILL: Rich Cathers tells the following story: PP: A story is told of two unmarried sisters who had so bitter a ruckus they stopped speaking to each other. Unable or unwilling to leave their small home, they continued to use the same rooms and sleep in the same bedroom. A chalk line divided the sleeping area into two halves, separating doorway and fireplace, so that each could come and go and get her own meals without trespassing on her sister’s domain. In the black of night each could hear the breathing of the foe. For years they coexisted in grinding silence. Neither was willing to take the first step to reconciliation.

PP: The relationship between Jews and Gentiles in the Apostle Paul’s day was… horrible.

There was an inscription of that wall that said: Any foreigner and stranger and Gentile what enters beyond this wall is under the penalty of death.

PP: That’s why the Apostle Paul described Jesus this way: For He Himself is our peace. The meaning is clear:

Meaning, no one (Gentile or Jewish Christian) is superior to the other,

NO.. Jesus has made us both one, the same, before God and before each other.

Look, in the world around us there has always been walls that divide us and perhaps there has never been such a division between people as there is today: We are divided by:

In the church it’s not much different. We are divided by:

Faith in Jesus.. listen Christian, has made us one people.

Transition: In verse 15 Paul makes our oneness a bit clearer.

PP: by abolishing the law of commandments expressed in ordinances, that He might create in Himself one new man in place of the two, so making peace

This was radical… Paul, through the inspiration of the Holy Spirit was saying that:

God opened up access to His presence for all… apart from following the Jewish religious, ceremonial laws that the Gentiles were never a part of.

Look, before Christ, we didn’t fit together because we were separated from Jesus. But now, Jesus has made us one new man/person.

Friends, that’s 2 Corinthians 5:17 Therefore, if anyone is in Christ, he is a new creation. The old has passed away; behold, the new has come.

The… new… is being pieces that now fit together and that… is our purpose.

Transition: In verse 16 Paul even further expands upon our oneness in Christ.

PP: and might reconcile us both to God in one body through the cross, thereby killing the hostility.

Through His death on the cross, Jesus reconciled, made us right with God, when we were once His enemy.

He did that in the very same way for individual Jews and Gentiles whom God saved by His amazing and abundant grace through faith in Jesus.

Then… God made them/us a new creation, a new man/person individually…

He joined us… together, He made us fit together with other Christians, to form one body, one new race, one new people for God.

PP: It’s like God takes the individual lego pieces and glues them together with all the other lego pieces so that we’re one unit, one house, one body… forever.

Transition: And what’s the glue that keeps us bound together? The Spirit of God.

PP: And He came and preached peace to you who were far off and peace to those who were near. For through Him we both have access in one Spirit to the Father.

By God’s gifts of grace and faith,

It’s through the same Holy Spirit that indwell each and every Believer, that we have access into God’s presence.

Transition: The idea is we come into God’s presence as members of one family of God, as we’ll see in verses 19-20.

PP: So then you are no longer strangers and aliens, but you are fellow citizens with the saints and members of the household of God, built on the foundation of the apostles and prophets, Christ Jesus Himself being the cornerstone

Think about this…You will do things for family that you wouldn’t normally do for others who aren’t family.

I believe God wants us to know that we share those same responsibilities because as Christians, God has made us part of the same household… the same family.

But, by God’s grace, we were saved individually, yes, but not meant to stay individuals. He intended us to be part of His forever family, the text says fellow citizens (of God’s Kingdom) and members of the household of God.

Friends, listen, this oneness, this unity, this end to hatred, bitterness, prejudices and envy, this fitting and being glued together by the Spirit, is not an intellectual or theological idea that we discuss and teach.

Paul reminds us that this household, this citizenship is based on the foundation of the apostles and prophets, Christ Jesus Himself being the cornerstone.

All of them speak of One, the Messiah, Jesus, God Himself who will come and die

Jesus, is the cornerstone, the most important part of the building. w/o Jesus all of this falls apart and is nothing.

Transition: Paul gives us one more picture, analogy of this new life that causes us to be fit together with other Christians. He uses the term temple.

PP: in Whom the whole structure, being joined together, grows into a holy temple in the Lord. In Him you also are being built together into a dwelling place for God by the Spirit.

Speaking of Jesus, Paul continues to explain how we as Christians fit together.

He’s referring to the temple, perhaps likening it to the one in Jerusalem.

The Temple in Jerusalem is where God said His presence would dwell. That is, until Israel rejected the One True and Ever Living God, to follow the gods of the pagan world around them.

Here’s the picture as I see it.

The essence is this.

Conclusion: PP:  Friends. If I could hope to leave you with one truth to remember and hold on to, it would be this:

To help us remember that wonderful truth, I have a couple of lego blocks for each of you, to remind you that